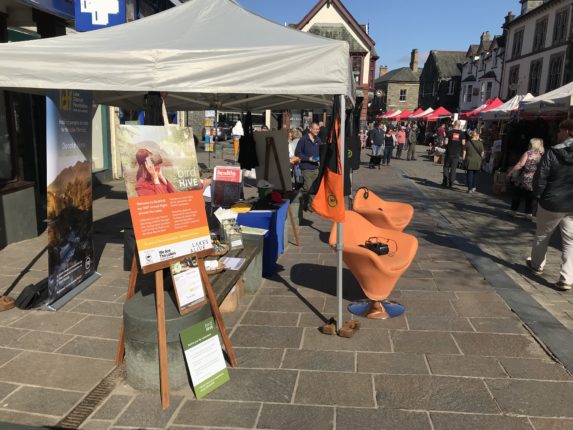 The Lake District Foundation is celebrating after a successful fundraising weekend for the Keswick to Threlkeld  Railway Path.

Over £1,500 was raised over the weekend and hundreds took part in the special K2T Challenges set by the Foundation. The Lions and Rotary volunteers were out in force over the weekend leading on the street collections and took donations from successful 5km challengers.

The K2T weekend was aimed at engaging everyone who was visiting Keswick over the Bank Holiday to get outside, enjoy the great weather, try out one or more of the five different 5km routes suggested by the Foundation and make a donation to the fundraising drive to reinstate the Keswick to Threlkeld Railway Path.

Heather Askew, Fundraiser for the Lake District Foundation was delighted with how the weekend went and wants to see this support and awareness continue over the next couple of months. Heather said “It was fantastic to speak with so many people over the weekend and hear everyone’s personal stories and memories of the railway path. Everyone we spoke with was keen to back the campaign and give the 5km challenge a go if they could. Don’t worry if you missed the weekend, the K2T Challenge can be done anywhere at any time! So you can still get outside, complete 5km, donate £5 (text ‘KTOT18 £5’ to 70070), and nominate five people to take on the challenge too”.

The fundraising events continue over the next couple of months with the Hope Park Games and Cafe ‘K2Tee Off’ competition on Thursday 17 May which will be an optional fancy dress golfing competition. The Alhambra Cinema is holding a talk and film showing by Sean Conway on Thursday 7 June and the Foundation will be holding an exclusive ‘money-can’t-buy’ auction on 8 June at the Lodore Falls Hotel with the auction lots being revealed later this week

For details about all the events, visit lakedistrictfoundation.org.