Keswick and Lake District businesses are coming out in force to support the Keswick to Threlkeld Railway Path reconnection.

Over 50 local Keswick businesses from shops, cafes, attractions, hotels and camp sites have already signed up as fundraising campaign partners and more are coming on board every day. They are armed with donation boxes, posters and flyers all at the main reception desks and check outs to raise awareness and encourage donations from visitors and locals.

Promoting the campaign via local businesses online channels is crucial too to help spread the word and unlock further donations. Keswick Tourism Association has done exactly that, supporting with enewsletters to visitors, website information and social media sharing.

Many businesses are planning additional fundraising activities as well, including local pet shop, Podgy Paws, working with takeaway café Cake & Salad are holding the Big Community Quiz on the 13 April, 7pm in the Back Bar in Keswick. Whilst both The George on a Tuesday night and The Packhorse on a Wednesday night are currently holding their weekly quizzes in aid of the fundraising. The Threlkeld Village Hall will be holding a benefit Gig on 14 April, 8pm and the Lodore Falls Hotel is working with the Lake District Foundation on a charity auction evening on 8 June.

The K2T Challenge has picked up pace with local businesses getting behind the challenge and promoting via social media, including local mountaineering company, ’More than Mountains’, which completed the challenge on skis during the snow over the last couple of weeks.

Businesses are also digging deep, providing raffle prizes and giving direct donations. We’ve already received donations from Threlkeld Parish Council and Keswick Rotary earlier this month and we are delighted to have received £300 from Sally’s Cottages in the last week.

Heather Askew, Fundraiser for the Lake District Foundation, is absolutely delighted with the business support so far but wants to encourage more businesses to get involved. Heather said “We are thrilled with all the businesses backing the fundraising campaign and want to say a massive thank you in advance for your support. We’ve also launched a fundraising toolkit to make it easier to get involved: head to the Lake District Foundation website and you can download your own poster, leaflets and see further ideas on fundraising initiatives”. 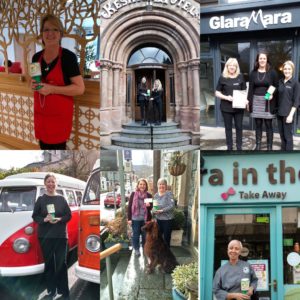