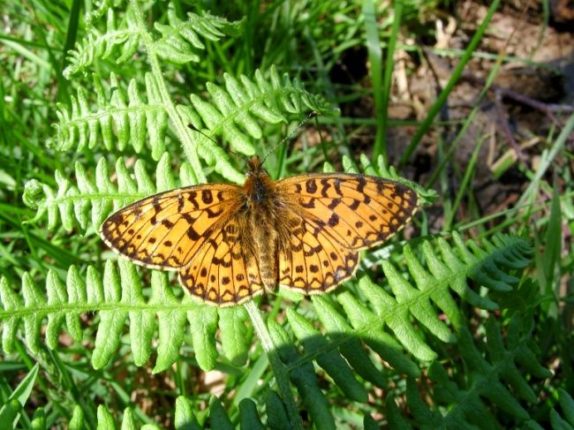 Last year the Lake District Foundation made a grant to support conservation work at Warton Crag Nature Reserve, and in March 2018 the staff and volunteers at Lancashire Wildlife Trust completed a project to provide habitat for rare butterfly species.

Warton Crag is a nationally important area of limestone habitat including grassland, woodland and limestone pavement, supporting some of Britain’s rarest butterflies, including Peal Bordered Fritillary and High Brown Fritillary, as well as an array of other rare invertebrates and plants.

The woodland is managed by coppicing, which provides patches of open, sunlit ground vital to Fritillaries and a range of other woodland species. The areas of limestone grassland and bracken are managed by conservation grazing using hardy, native breed cattle, which help maintain a mosaic of important habitats.

During the summer of 2017 work started on timber extraction from felling works during the previous winter. Because part of the site is designated as a Scheduled Ancient Monument (SAM), one of the conditions attached with the permission from Heritage England was that a temporary bridge had to be built over the upstanding features of the upper ramparts before machinery could be taken up to the summit to extract timber. This was achieved using a geotextile mat backfilled with wood chip produced on site and lengths of chestnut paling to stabilise the chip on the slope. 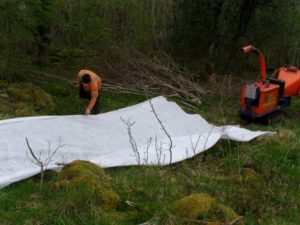 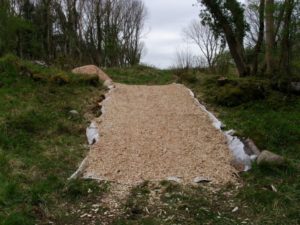 Around ten tonnes of timber particularly the less accessible unstacked lengths were moved by hand with staff and volunteers and then extracted using the Trust tractor and a hired in ATV. Contractors were employed to take off the remaining larger timber stacks using specialist equipment to ensure there was no damage to either the SSSI or SAM and work was completed at the start of August 2017. 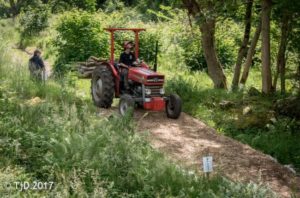 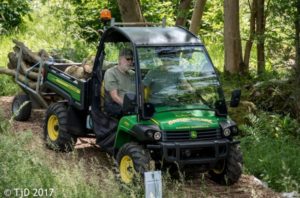 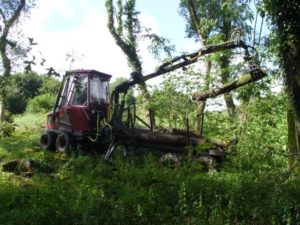 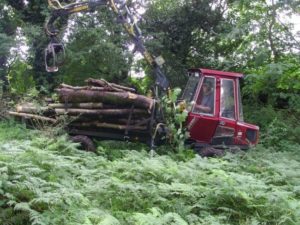 Monitoring work during the summer of 2017 produced very low numbers of Pearl-bordered and High Brown Fritillaries but there was good news with an excellent year for Small Pearl-bordered with the best numbers for over ten years. It was also great to see many of these using the new rides and coppiced areas. 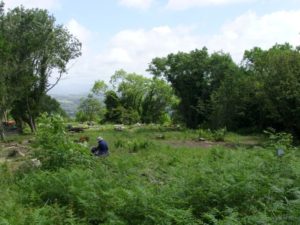 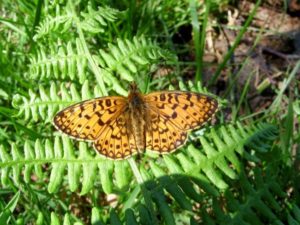 Work started early in the 2017/2018 winter season to complete the second phase of the main felling works. After completing the ride down the southern ridge below the summit, work started on the new ride down towards Westfield in early 2018.

All the work was finally finished early in March 2018 and the main network of rides has now been completed. Summer 2018 will see the remaining timber extracted and the usual summer work of butterfly monitoring and bracken control.

Lancashire Wildlife Trust are currently looking into developing outlets for some of the timber to help financially support future ongoing maintenance work, as well as looking to develop ideas for utilising the smaller coppice wood from ongoing management in future years.

The next Lake District Foundation call for grants will open on 1st July 2018. If you work on projects that care for the landscapes, wildlife and cultural heritage we would love to hear from you.