Thank you for your amazing support for the Dubwath Silver Meadows project.

Dubwath Silver Meadows is one of the best sites in Cumbria for people to see the plant and animal wildlife of wetland and other habitats that range from open wetland to wet woodland and from open grassland to dry woodland. Its peaty soils soak up water and then slowly release it, acting like a sponge. This gives it an important role in controlling the flow of water into Bassenthwaite Lake and flooding in the catchment and beyond. 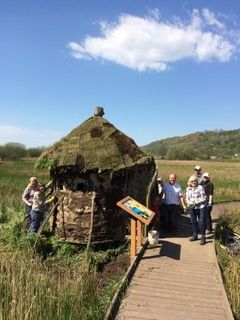 The Dubwath site is traditionally wet and regularly floods, but 2016 was a particularly challenging year following the damage caused by the storms of December 2015.  Visitor numbers were down whilst volunteers spent much of 2016 generally cleaning up the site after the floods and repairing damage.  The Celtic shelter, which was badly damaged, has been rebuilt.  Hides, boardwalks and information boards – newly installed in late December, just in time for Storm Desmond – have been repaired.  Your donations helped buy materials and fuel for all this work.

By the end of the year, focus could return to regular and planned maintenance.  The new log seat, replacing one that had rotted and which was finally broken up by the floods, has been replaced.  As well as rebuilding the Celtic shelter, planned repairs were made to the wattle-and-daub of the Norse shelter.  Cutting back, lopping, tree management and general pruning were all carried out.

A new white board for visitors’ comments has been purchased using funds donated through Nurture Lakeland.  This is proving to be particularly popular with children, who use it to list the birds, animals and flowers they have seen whilst visiting the site.

None of this would be possible without your fundraising efforts.

Thank you again for your amazing support!