The Lake District’s landscape is a patchwork of habitats. Our meadows and peatlands add to the diversity of plants and wildlife we find here, but need our help to be restored back to their former glory.

Hay meadows are important for the plants they support. A hay meadow can support an incredible 50 plant species/sq. metre! Traditional meadows are still found in Cumbria, where higher altitude meadows support specialist plants species, such as wood crane’s-bill and many of the lady’s mantle species, and lowland meadows, are characterised by a rich diversity of more common plant species. Such a wealth of plant species can in turn provide habitats for many different animal species including the brown hare, insects such as the great yellow bumble bee, and birds such as skylark, curlew, lapwing and twite.

Cumbria Wildlife Trust is also helping protect wetlands across Cumbria, demonstrating new restoration techniques and building partnerships to protect Cumbria’s peatlands. The project is working on a wide range of important wetland habitats including fens, blanket bog and lowland raised mire. The majority of these habitats occur on relatively deep peat soils which are collectively known as peatlands … but these peatlands urgently need careful management to reverse the damage caused by drainage, heavy grazing, regular burning, cultivation, forestry and other management.

Restoring the balance of nature in our peatlands benefits both people and wildlife:

Peatlands are the UK’s largest carbon store – with 28.5 million tonnes in the Lake District alone. Our damaged peatlands are decomposing, releasing carbon dioxide back into the atmosphere.

70 per cent of UK drinking water is from upland (generally peat dominated) catchments.

If the Sphagnum moss is damaged, the surface dries, crumbles and cracks in summer; later rapidly eroding during severe weather. Blocking drains slows run-off, whilst wetlands in valleys store floodwater.

Fascinating specialist species including carnivorous plants have adapted to the harsh peatland environment. Many have population strongholds in Cumbria. The most threatened species depend on the wettest bogs or need large areas of continuous habitat.

Take a look at the great work our fundraisers have supported recently: 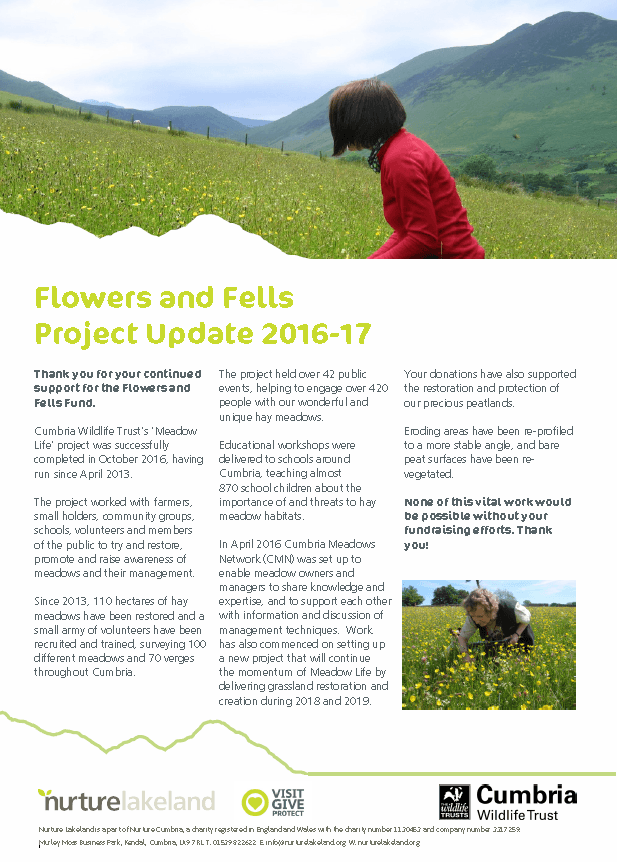