The Lake District Osprey Project is a partnership between the Forestry Commission, Lake District National Park and Royal Society for the Protection of Birds (RSPB) with fantastic support from many volunteers. The partnership aims to ensure the continued success of breeding ospreys at Bassenthwaite, and voluntary donations are vital to the success of the project.

* For the latest information visit http://www.ospreywatch.co.uk/wordpress/

In 2001 a pair of ospreys nested beside Bassenthwaite Lake and became the first wild osprey to breed in the Lake District for over 150 years. The birds were encouraged to stay with the help of a purpose built nest provided by the Forestry Commission and the Lake District National Park. Once the eggs were laid, wardens kept a round the clock watch to prevent disturbance and deter egg thieves, and a pair of ospreys have been visiting the nest ever since.

Last year’s breeding pair, KL and Unring successfully raised one precious chick, Bega, who began her hazardous migration southwards to Africa in early September.  Only 20-30% of juvenile ospreys reach adulthood to reproduce, and the majority of these fatalities occur in the first migration.  After loitering for a few days around Foulshaw in the South Lakes, Bega started her journey in earnest, flying via the Atlas mountains and along the coast of West Africa to reach the rich fishing estuaries of The Gambia and Senegal.  Sadly, her tracker stopped transmitting in November after she flew inland to the East of Senegal, an inhospitable region where other ospreys have perished … everyone following the Lake District Osprey Project is hoping against hope that this is a technical failure, but the signs are not good.

Meanwhile, her elder sibling, No 14, hatched in 2013, took a more easterly route over the centre of the Sahara desert to reach his winter destination.  This is his third trip back to the island of Bioko in Equatorial Guinea, and his transmitter showed him to still be fishing and flying there in late February.  He should start his journey back to Cumbria very soon …

And what of Mum and Dad?  Well, the project’s adult female, KL, left for Senegal in mid-August 2016.  Unring (so-called for obvious reasons!) will also have been sitting in the sun somewhere in the South.  Fingers crossed that they will return to Bassenthwaite by late March/early April and successfully breed again.

Back in Cumbria, the camera systems at the nest site have been upgraded and now include functions to pan, tilt and zoom, which will add an exciting new dimension for web-cam viewers.  Visitors will also be able to enjoy much improved viewing at the Lower Viewpoint at Dodd Wood following an extensive trim to the trees through the winter.

The success of this conservation project is dependent on the protection of the ospreys’ habitat for feeding and nesting, and on wardens keeping a round-the-clock watch to prevent disturbance and deter egg thieves. 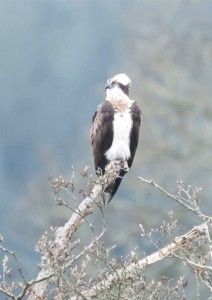 This vital conservation work could not happen without your donations.  Thank you for helping to protect this wonderful species.