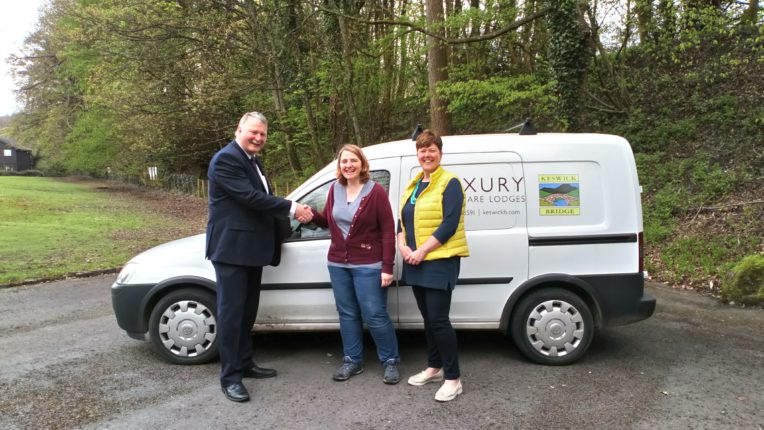 The Lake District Foundation is thrilled to announce that it has received over £20,000 of donations for the Keswick to Threlkeld fundraising campaign over the last couple of weeks.

The donations have been made by The Keswick Enterprise Holding Charitable Trust, Keswick Town Council and Keswick Bridge Complex.

The Foundation was absolutely delighted to receive a cheque from The Keswick Enterprise Holding Charitable Trust who generously gave £15,000 in support of the fundraising efforts. The Chair of the Trust, John Harvey, heard about the campaign from the local news and was keen to back the fundraising drive. John said “I have enjoyed the beauty and pleasure of the railway path for many years when I visit Keswick. The scale of the fundraising challenge is daunting but I do hope our donation will bring the Lake District Foundation closer to the £300,000 target and hopefully encourage others who are yet to donate to do so”.

The good news continued with confirmation of £2,000 donation from Keswick Town Council, who recognise that this trail is an important part of the local visitor economy and community.

The Lake District Foundation celebrations continued after a successful fundraising weekend for the Keswick to Threlkeld  Railway Path raising over £1,500. Hundreds took part in the special K2T Challenges set by the Foundation. The Lions and Rotary volunteers were out in force over the weekend leading on the street collections and took donations from successful 5km challengers.

The Lake District Foundation, formerly Nurture Lakeland, is the charity raising funds to protect and conserve the Lake District National Park. Sarah Swindley, Director, explains why the foundation is pleased to be supporting the Keswick to Threlkeld campaign, saying “We are delighted to be spear-heading the fundraising campaign, raising awareness and engaging visitors, locals and the business community to donate to the project. The foundation aim is to encourage those who visit the Lake District to help us to protect and give something back.  The path, is hugely popular with locals and visitors to the Lake District alike, has been hugely missed since being extensively damaged in the storms of December 2015. It’s  wonderful to see donations coming in from the community, businesses and visitors and we thank you all for your generous support”.

The Lake District Foundation have set up a number of ways for people to donate, either via their Just Giving Page, by texting ‘KTOT £10’ to 70070 or by cheque addressed to the Lake District Foundation. All donations are welcomed big and small as they all count to help reinstate the path. You can keep up to date with the campaign by visiting lakedistrictfoundation.org.