For more than two decades Fix the Fells has been looking after and repairing remote upland paths across the Lake District.

Now their efforts have been recognised with a prestigious Park Protector Award from the Campaign for National Parks.

We spoke to Joanne Backshall, Fix the Fells Programme Manager, about this vital programme and its impact on this World Heritage Site.

Tell us about the work of Fix the Fells

“Fix the Fells repairs, maintains and monitors hundreds of miles of upland paths in the Lake District National Park to protect the stunning scenery and precious environment.

“It has been operating for over 20 years because it was realised in the 1980s that enormous erosion scars were developing in the fells which threatened the beauty and nature of the area.

“Fix the Fells works to repair erosion damage caused by recreation and rainfall, both of which are increasing as more people visit the area and climate change causes more frequent storms. 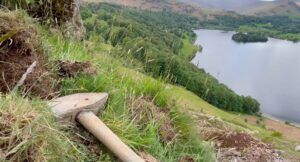 “The work is carried out mostly by hand by teams of skilled rangers and an army of over 100 dedicated volunteers who work outside in the fells in all weathers. Stabilising erosion and creating sustainable paths is necessary to prevent vegetation, soil and stone being lost and washed into rivers and lakes below.

“The work is essential to protect and restore the World Heritage Site with its internationally designated landscape, habitats, species, history and culture.

“It is hard to imagine what the Lake District would look like today without the work of Fix the Fells.”

Where is Fix the Fells up to at the moment?

“The rangers and volunteers are at work all across the Lake District repairing erosion and maintaining paths, for example around Coniston, Grasmere, Ambleside, Keswick and in the Ullswater, Langdale, Buttermere and Wasdale valleys.

Which are the biggest or most interesting projects currently?

“We’re always at work on the main routes up Scafell Pike, the highest mountain in England, which attracts hundreds of thousands of walkers to its summit every year.

“Long distance walks such as the Coast to Coast attract visitors from all over the world, who come to enjoy the Lake District scenery, and we’re repairing erosion on several sections of the route, for example as it passes from Borrowdale to Grasmere.”

What does the recent award mean to Fix the Fells?

“We are absolutely thrilled and honoured to receive the Campaign for National Parks – Park Protector Award.

“It is a fantastic recognition of all the hard work of the many rangers and volunteers within Fix the Fells over the last 20 years, who have committed so much to looking after the Lake District’s upland paths and landscape, for us all to enjoy.

How can people help Fix the Fells?

“People can help by sticking to the path surface (not walking along the fragile edges), wearing the appropriate footwear (which can cope with a bit of mud and water), volunteering with us, and most importantly, donating to Fix the Fells to help look after this stunning scenery and precious wildlife for us all for the future”.